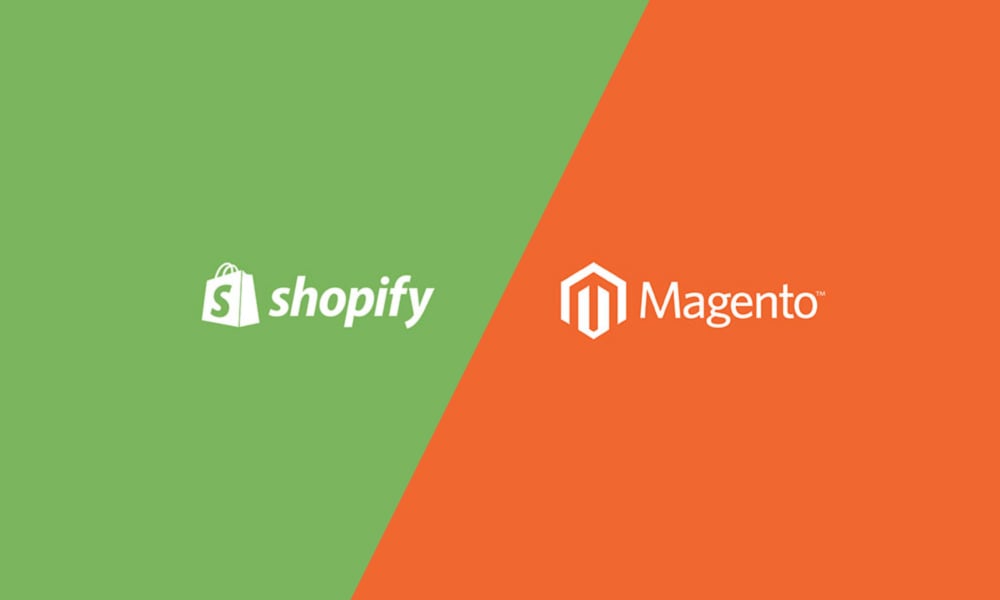 Both Shopify and Magento are well-established ecommerce platforms whose business consists of providing online-store operations for every type of interested business owner. Ever since it was launched, Shopify has hit a lucky streak, and boasted more than $10 billion of merchant profit in only 10 years. No wonder its carts are the most popular in the world right now!

The customers are mostly small and mid-sized businesses, but some of them have grown into serious ecommerce players with solid stake in their industries. The reasons why people choose Shopify are good customer service, slick themes, and a user friendly interface. 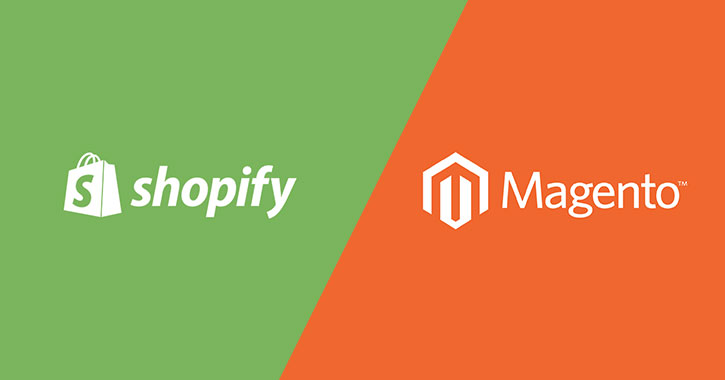 Magento, on the other hand, is a solidly hosted cart option, backing up some of the most powerful companies in the ecommerce world. Ranking high on the list, this platform dealt with some serious brand iterations (for example, the on-cloud Magento Go which specializes in small retail). Let's dive right in to our Shopify vs Magento post:

There are two different versions of Shopify, both of them containing several separate editions. The leading version has the following editions: Basic, Professional, and Unlimited.

All three are hosted directly by Shopify, meaning that a customer’s store starts running immediately upon registration. As a successful retailer whose store receives incredible traffic, you’ll be free of additional expenses for configuring a personal server.

Shopify Basic doesn’t impose restrictions on the number of products you’re selling. In fact, retailers with a vast product spectrum can sell here for as long as they want, without paying top dollar every year. Basic’s storage, on the other hand, is limited to only 1 GB, and you cannot display the entire range at once (you’d have to put fewer photos for some products). The good thing about this plan is that it still provides great telephone support. 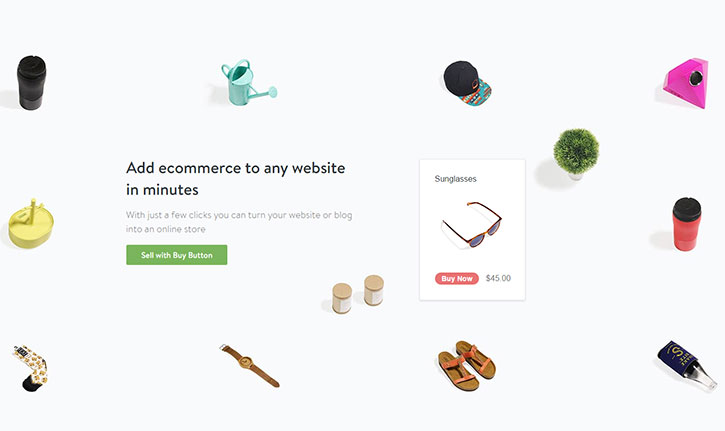 Shopify Professional provides 5 GB of storage space, meaning that it can showcase more of your products to clients. This plan charges 0.4% less per credit card payment, and will entitle you to a detailed analytics report on your store’s performance.

Before you decide to upgrade, we recommend you to do some Google Analytics exploring: the service is free, and it’s quite straightforward when it comes to understanding your store’s modus operandi. Additional extras worth of attention are Gift cards and Abandoned Cart Recovery, even though both could be easily attached to the starter plan too.

Take Shopify Professional and think of the coolest features that can be added there to make your store perfect: we bet our dollars that your imagination won’t take you far from the Unlimited package. There is a reason to call it Unlimited: there are absolutely no limits on storage, products, and possibilities. Not to mention the financial advantages of having one: transaction fees are completely absent, and a shipping carrier is always included in the price.

The Unlimited package was designed to serve the needs of medium e-stores, but large merchants also can take advantage of the package. They pay $179 per month, and without transactional fees, they end up having a better deal than the owners of a Professional package.

Shopify Plus for High-Volume Enterprises

What about owners of  pre-existing online businesses? Shopify might be the platform for novice merchants, but that doesn’t make it less competent for handling established ecommerce businesses. In fact, there is a specially designed pro version for high-volume stores and enterprises. It’s called Shopify Plus.

Does it make sense to own a Shopify account if you’re already selling goods on the web? Actually, it does! Shopify Plus assigns you a team of expert managers to develop fast and efficient solutions for your online store. For instance, you'll get a personal project manager to connect different aspects of the business, and to help you build a reliable network of integrations. Basically, the core purpose of this package is to assist with technical support, and to provide well-wrapped knowledge entrepreneurs don’t always have.

With Shopify Plus, you’ll be able to accomplish more integrations than you ever thought you would. There is an outstanding API to connect all important aspects in an extremely functional way (accounting, CRM, multi-channel software, etc). The package also grants you access to Shopify’s best on-site apps, such as Yotpo and Justino.

As you expect, Shopify Plus goes beyond what entrepreneurs perceive as a reasonable price for technical support. The pricing model for Shopify Plus varies, and the amount depends on the services you’re using. However, we believe that a developed business could and should afford it, because it is the best online support and software management that money can buy. Many successful stores already know this!

Magento was developed under the same concept as Shopify, aiming to attract users searching for versatility and a more flexible configuration when it comes to their ecommerce platform. Many aspects coincide, including the fact that there are different versions to choose from (even if the versions are fairly different from each other). 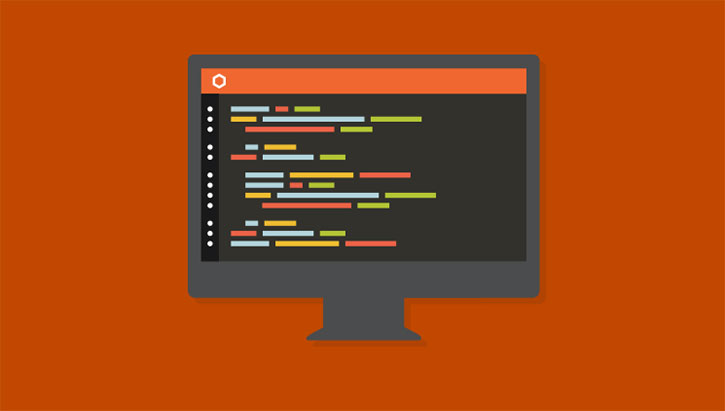 Magento’s open source version is called Magento Community Edition. It is a ‘win-win’ for small store owners who want to host their own space, and it is absolutely free of charges. So far, it has been the dream choice of web developers, whose online stores are heavily charged and customized.

Being an open-source store, Magento CE doesn’t really offer user support, and will not assist every of your problems. Instead, there is an online community of colleague operators, where you can discuss the problem with interested developers, and parties enthusiastic to help you deal with your issues.

The basic edition is well-cut for launchers, especially those that sell via newsletters, special offers, and coupons; and ask customers to fill wish lists, so that they could know what to expose next, or in which direction to update their work. It may require some personal know how-s here and there, and you’re likely to do your own feature customization, but the modules are fairly simple and there are many online solutions that can help you do that (gift certificates, orders registers, etc). Long story short, you get what you paid for! 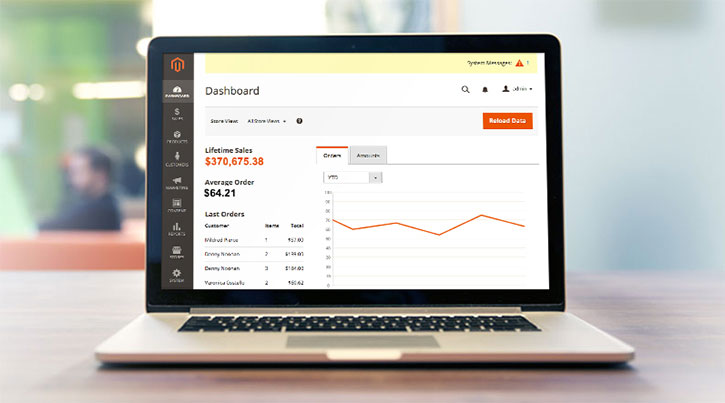 CE is mostly chosen by mid-size companies, and would be the first version large ecommerce business would look at. Still, Magento picked the pace of not having a large-scale operative mechanism, and designed an Enterprise Edition of its own.

There isn’t much to make the EE special, but customers seem to fancy the Full Page Caching, meaning that each cached version (categories, products, CMSs, etc) can be served separately. It makes shopping significantly faster, even when a lot of users are ‘doing their window-shopping’. Sounds like the ‘total sales’ master, doesn’t it?

Unfortunately, the ‘speed trick’ means Magento is known for being slow OOTB and you have to consider caching carefully before you become a full-time user. A good way to reduce the risk is to opt for the Enterprise Edition, since it offers full page caching, and it preserves your right to contact the Magento Community for support and advice.

Both the Community and Enterprise edition are rated as user-friendly, with intuitive customization and powerful features. Their strongest feedback is that the website never stops improving, and there is always an innovative feature to showcase the values of a particular brand.

Which One to Choose: Shopify or Magento?

A decent comparison will not be as streamlined as you expect it to be: both platforms offer different solutions, and they excel in completely different ways. If we had to draw a top criterion that is actually comparable, that could only be their performance history; and it would instantly put Shopify on top of our list.

Besides, Shopify has the advantage of intuitive interface, fast and simplified setup, and millions of online retailers behind them to tell their happy endings. 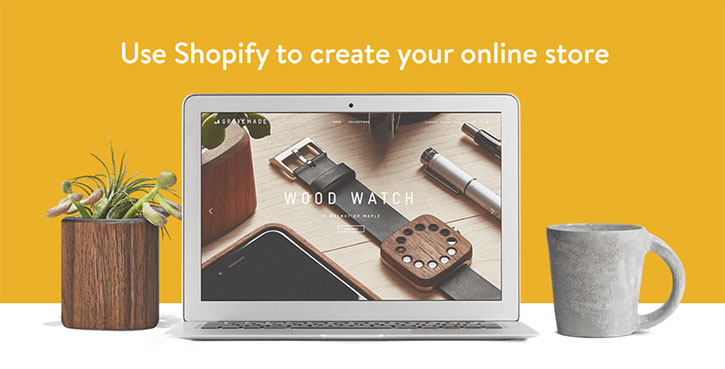 If you still can't decide on Shopify vs Magento, then at the risk of sounding biased, we’ll face the music and recommend Shopify. I guess that being almost through with this article, most of you won’t even need us to say this.

So, go and try Shopify! Compare their features to your needs, and focus on your business. It won’t drain your budget, but it could be the perfect technical solution you always wanted.

Bogdan is a designer and editor at DesignYourWay. He's reading design books the same way a hamster eats carrots, and talks all the time about trends, best practices and design principles.