Its time for some more free stuff everyone, and I have a good little giveaway for you! The kind folks over at Electric Rain have offered up 3 copies of Swift3D V5 ($249 value each) to 3 lucky BittBox commenters. If you're not familiar with Swift3D, it's a very powerful 3D modeling/animation software that makes it super easy and fast to create stunning 3D animations and import them directly into Flash without writing a single line of code. Even if you don't win, enter the promotional code “BITTBOX” to save 15% off the regular price. Details and more on the software after the jump. 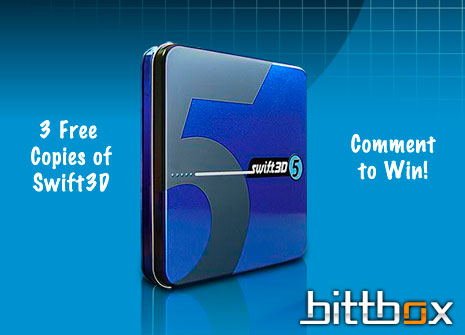 If you haven't ever used Swift3D, or you've never heard of it before, here's the low-down. Swift3D is a 3D modeling and animation environment that makes professional animations that can be exported and integrated very easily into Flash. Not only does it make 3D animations a snap, but the interface is easy to use and even a beginner can start animating in minutes. The thing I like the most about Swift is the fact that you can create things in a 3D environment, and export them in vector format, yes vector. I like to design intricate 3D scenes and export them as an AI file to use in Illustrator, but you might be more interested in the Flash side of the program, I don't know. In fact, I wrote a tutorial a long time ago about using Swift3D as a powerful 3D Illustration tool, if you're interested in reading that.

Like I said, I use Swift3D mostly for exporting single frames an vector format to use in Illustrator, but that's what's great about this software. It can do so many different things, I'm sure many of you could find plenty of good uses for it. Good luck to everyone! Let the contest begin 🙂

Continue Reading
You may also like...
Related Topics:Contest, Giveaway, Swift3D