This is by far the most-emailed question I get here at BittBox. How can you make vector halftones from raster images? Well, our friends at Adobe haven't seen the need to throw us a bone in this situation yet, but there are some brave souls out there taking on the challenge themselves, and answering the call. I'm going to show you 3 different ways to create vector halftones from raster images, 2 of which are free, and the 3rd is only $15. Grab a random image from your archive, and let's get to it. . . 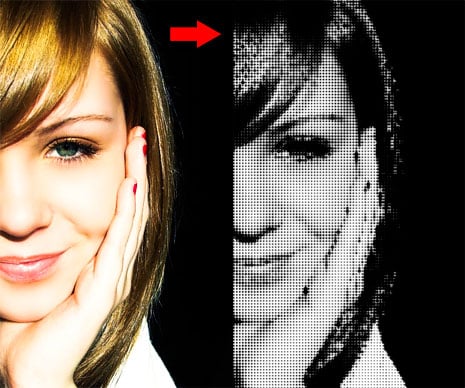 First things first, the image I'm using in these examples is a CC liscensed portrait by *Zara over at Flickr.

(PC users skip to #2) Lets start with the best of the 3, Vectoraster by Lost Minds. Unfortunately, Vectoraster is only available for Mac and has a $15 price tag, but it's well worth the cost once you see the features its packed with. First of all, and probably most importantly, Vectoraster lets you see your adjustments in real-time. This means that as you drag the sliders and adjust the settings, you don't have to wait for a preview, or publish the file multiple times to see what you get. The software waits to process anything until you export the file. Pretty nice. Vectoraster is also a breeze to use. Let's take it for a test run…

After you install it, if you're not sure if you want to purchase it yet, just close the registration box. You can purchase a license later.

Now with Vectoraster open, you won't see any windows at first. You have to go to File > New, or hit Command + N to bring up the interface.

Once you have the interface in front of you, drag your raster image to the “image well,” not the blank window. Or you can click on “Browse” in the upper right.

Now that you have your image loaded, Vectoraster will automatically display a halftone over the top of your image with the default settings.

I like to take the slider at the bottom all the way to the right, so all I see is the halftone, not the image, but do what you like.

Now all you have to do is start playing with the settings to get your desired effect. You can change things like the shape of the dot, spacing, rotation, grid size, minimum and maximum dot size, and much more, in real-time. You can even invert the image itself, or choose to make the halftone only hit a specific color.

You can even apply effects to the grid itself. Like twist, wave, bulge etc:

Once you have your halftone the way you want it, go to File > Export as EPS… and save your file. Now you've got a nice Vector Halftone that you can open in Illustrator and apply it to an infinite amount of uses.

The Scriptographer plugin is a handy set of scripts for Illustrator that will do vector halftones, but the plugin itself does a lot more than just vector halftones. And best of all, it's free. (the author does accept donations though). For the longest time, Scriptographer wasn't available for Intel Macs, but in late 2007, the new scripts were released. (sweetness).

Download and install Sciptographer and we'll get started.
Installation instructions are here.

First, open Illustrator and place your image on the artboard. Go to File > Place, then navigate to your image file to place it.

Now, I've only dabbled with Scriptographer and I manage to get desirable results somewhat consistently, but I'm pretty sure that the size of your placed image really doesn't matter, so I typically scale my image way down, to almost thumbnail size. My artboard is about 500 x 500px, and here is the size of my placed image: (quite small)

You need to ‘Rasterize' your placed image. I'm not 100% sure why, but from poking around some documentation and a few google searches, this seems to be an important step in order to get Scriptographer to behave properly. If you skip this step (which I did a few times) it will take much longer to run the script, and possibly crash Illustrator at the same time. Select your image and go to Object >Rasterize.

Choose “72 dpi” for your Rasterize setting and click OK.

The next step is to draw a dot (or a star, square, whatever you want your halftone to consist of) on the artboard. Keep in mind that you can set the scale of the dot later, when we run the script, so any dot will do fine. Here's my artboard with my image and my dot:

Next, select BOTH your image and your dot, and in the Scriptographer window select the “Object Raster” script and hit the play button in the lower left corner to run the script.

You'll now have 2 options before the script runs. Grid size and Object scale. Grid size is the distance between the dots, and Object Scale is the maximum dot size. If you leave Object scale at 100%, your biggest dot will be the same size as the one you drew on the artboard. Play around with these settings later, just click Ok to run the script.

After you click Ok, you'll see the progress indicator. It might take a moment or two for the script to run, but you might not see anything on the artboard after it finishes. When I run the script, it places the finished product up and to the left of my artboard (out of view). You can zoom way out before running the script if this bothers you.

And after the script is done, the result is typically very large. So I scaled it way down and took a screenshot. Here's the final product using the Scriptographer plugin:

Now, this is why I ranked Vectoraster higher on the scale. If you use Scriptographer, it's pretty much trial and error, and there are only 2 settings you can play with to try to get your desired output, nevertheless it's a gem of a plugin. Repeat this process with a couple different settings to see if you can get what you are looking for.

Price: Free [PC only Download, Online App for everyone else]

The Rasterbator is meant for scaling images up to huge proportions. In other words, take a jpeg, and make it printable for a billboard. To do this, it creates halftone patterns on a very large scale from a very small image. If you aren't looking for anything very detailed, it's not a bad solution, but certainly not the best. If you're a PC user, you can download a standalone version, and everyone else can Rasterbate images online. Lets give it a go…You can download the desktop version, but since I'm on a Mac, I'm going to walk through the online version.

Go to the online version here

Upload your image and you should see something like this:

Hit “Next” at the bottom, and you'll get a dialogue box. Click Ok.

Now you should see your image on a grid. You can adjust your paper size if you like.

Now all you have to do is select your dot size, then click the “Rasterbate” button. (You can also set color options here if you like)

After your image has been processed, you'll get a download prompt. Click “Save to Disk” and it will save to your browser's default downloads folder.

I mentioned earlier that The Rasterbator outputs PDF files, but luckily it outputs PDF's with vector data. So now all you have to do is open the PDF with Illustrator and you can do whatever you want with it. Save it as an EPS, AI, or whatever.

Here is the final result. Like I said, not quite as detailed, but a vector halftone nonetheless. You won't find me complaining about a free service, even if it is a little less than I hoped for. The Rasterbator has few options, but if used for the right purpose, you can sometimes get the results you want. (In this case, the portrait didn't turn out quite as detailed as I'd like, but sometimes you have to play around with the settings (paper size and dot size) to get what you're looking for.